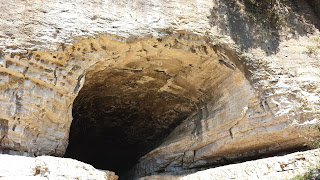 I’ve been riding across the United States for the past few months trying to ride in every state, I’ve worked it down to only 8 states. I’ve been bouncing back and forth across the Ohio River for a day and a half before making it to Cave in Rock, Illinois. From here I’m running up the Mississippi for a couple of days, I stop in the little town Anna for fuel. While I was having a snack at the pump, a couple on a new 2015 Electra Glide pull up for fuel next to me. They see my Montana plates and ask how the ride down was, I tell them about my ride across the country. He starts telling me some things around there I should see, she stops him, asking me if I’ve ridden the Ozarks yet. He smiles and say that’s definitely where I should ride. I ask “Where are they?” he says “Turn left here on Route 3, turn right on Route 60, then left on Route 65 and you’ll be entering the Ozarks.”  We say goodbyes, they head east, I head south.
I’ve been flying down Route 60 for about 30/40 minutes, enjoying the sun, warm breeze, and the increasing curves. Next thing I know, I hear that dreadful sound coming up behind me, yes he’s behind me lights a flashing. I pull to the side, put the stand down, shut her off, put my hands to my side and wait. He catches me off guard by not asking if I know why he pulled me over. He looks at me says “I clocked you at 87 mph in a 65 mph, I paced you at 78 mph in a 65 mph. But the main reason I pulled you over is we have Helmet Laws here!” 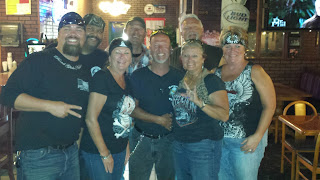 A look of shock comes over my face as I ask “What state am I in?”  He looks with a look of disbelief and say’s I’m in Missouri. While shaking my head, I ask if I can get into my touring pack, he says “Fine.”  I pull out my atlas, open it to Missouri revealing my writing saying Helmet Law. It’s at that point I say “Damn, it says it right here Helmet Law.” He looks at me with disbelief. I give over my license and registration as I’m trying to figure out how I ended up riding in a state with a helmet law without knowing it.
After some time, he returns with his clipboard which is never a good sign. He starts with a question, “Where are you riding from?”  I tell him about getting laid off while working in Montana and deciding to see the country instead of being snowed in a hotel in Montana. He says “Riding is a much better place,” then he says “This is what I did, I only gave you a ticket for 5 mph over but I couldn’t let you off on the helmet ticket, but don’t worry, it’s only $15 and does not carry any points.”  I gave him a Ride With Dirk card so he could keep up with my travels, he said he would be glad to follow. It was at this point I remember how I ended up in Missouri without a helmet. I told him about my hearing of a great road to ride and changing direction to ride said road. He gives a small chuckle, nod of the head, and walks back to his car.
After crossing into Arkansas, I stop at the first gas station to remove the helmet and top off the tank. As I’m filling, I realize that there are motorcycles everywhere, including the three that just pulling into the pumps. I put the cap on the tank and walk around the pumps to the first couple that pull in. It being Friday, I ask if there is a rally in town this weekend.  He and his woman look up in shock. He asks “You're not in town for BBB?”  I ask “What’s that?”  They look at each other as he says “It’s Bikes, Blues, and BBQ.”  I tell them I’ve just been riding across country. Now the rest of their group walk over to us, he tells them that I just happened across the rally, to their chagrin.  I start questioning the best roads to ride in the area, without a doubt the consensus was Route 123. They say locals call it the Arkansas Tail of the Dragon. Having completed it now, I would definitely say a great road worth the drive.  It even has a couple of surprising 15 mph turns that could catch you off guard if you’re not paying complete attention. 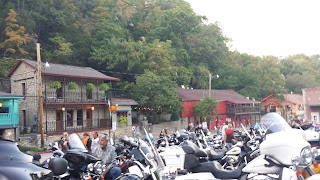 The day has been on a steady climb for late September, I’m realizing it’s rather hot. After finishing the Arkansas Dragon, I find myself thirsty and hungry so I pull into the first gas station that has food. I top off and head inside, standing in line, I start looking at my choices. Then I see it, they have Fried Frog Legs on the menu. Yes, I ordered a dozen frog legs from a gas station, and I must say they were awesome.  I grab an ice cream as I head to the register to pay. Standing outside eating my Klondike bar, leaning against a post and watching the people come and go, sitting in the rocking chairs are a couple of ladies, one is chatting it up with a lady as she passes. Off to the side are three guys watching the ladies, as the one lady finishes their conversation. The lady walks away and one of the guys asks “Do you know everybody?”  She replied “Yes,” I say “You don’t know me,” she looks up and says “I’m Debbie.”  Laughing, I say “My name is Dirk.”  He just shakes his head laughing.  Then she says “We’re heading to get a beer. do you want to go?”  While standing, leaning against the pole, I raise my arm look at my watch shrug my shoulders and say “sure.”
They start heading to their bikes as I finish my ice cream. I walk over, climb on mine and ride over to where they are parked, she says “I didn’t know you were on a bike.” I ask “What did you think I was going to do, follow you in a pickup truck?”  she shrugs her shoulders.  As they gather, we have the talker Debbie and her husband Wade. From there, it’s Rick and Astrid, Pam, David and they’re still looking for Max. Finally, Max strolls out of the gas station getting in line. They roll out with me bringing up the tail, 30 minutes later and one wrong turn, we arrive at the bar. As we put the stands down Debbie starts going over how they have become plus one.

We walk into the bar, finding it is just opening, after some confusion 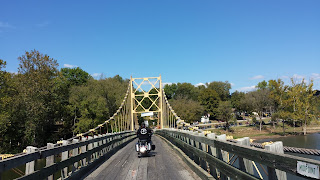 on the bartender’s part we get drinks. From there, we gather and they start telling me about their trip from Texas so far. After a couple of drinks, they decide it’s time to go for a ride, so I decide to hang with them for a while. They spent the rest of the day showing me their favorite roads. As we rode through the Ozark Mountains, changing positions, passing back and forth, talking as we rode, the day turned to night. Finding us in Eureka Springs, sitting at the Cathouse, having a few drinks, eating dinner and laughing about the day. It’s at this point I realize I don’t have a place to stay on BBB weekend and it might not be easy. I pull out the phone doing a search, I find one down the street taking it for the rest of the weekend. Turns out part of the gang is staying there.  After more stories and some cold ones, we head inside for some long awaited blues. The band is Katy Guillen & the girls, three young ladies with some of their own songs and kick ass renditions of the classic blues.  As the night wears on I realize I have made a lifelong friendship.

Riding is a lifelong friendship waiting to happen.

See the video from the ride by clicking here......


Or you can watch the faster ride with just the guys.....


Posted by RideWithDirk at 2:10 PM

RideWithDirk
Hi I’m Dirk and I give Guided Motorcycle Tours across the country as Ride With Dirk.To hone my craft, I got on the road and spent the entire year of 2015 riding through the lower 48 states learning all that I could of the county. I’ve ridden over 42,000 miles since my start. My goal has been to learn some of the best known, even better, lesser known rides across the country. I’ve ridden through federal parks like Moab, Bryce,Redwood, and Glacier. I had the pleasure of riding well known roads like, Tail of the Dragon, Going to the Sun, and PCH 1. I have been able to ride mountain ranges like Mt Washington, Pikes Peak, Crater Lake, and Glacier. While enjoying and experiencing the rides, I’ve also been compiling a list of the best Bike Weeks and Music/Beer Festivals, around the country. Unfortunately, I haven’t been able to compile a list of the 5 star Hotels, but I have gotten very familiar with the more affordable roadside Motels. All of this started as a selfish personal ride, it has now turned into an unbelievable need to ride every day. I have been so blessed to experience this, now I’m here to share it with you and show you my passion, the wonder and beauty of our country.