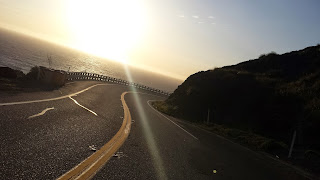 I’m riding up the PCH (Pacific Coastal Highway) in early Spring, I’ve been battling a cold, hard, windy rain for the last 3 days. As I drop out of the cliffs, down to an open section of beach just up past Eureka, the sun makes an appearance. The last of the clouds have lifted and the wind has vanished. I pull into a spot at the beach near a 650 Yamaha with Canadian tags. There are a couple of backpacks laying on the ground next to the bike. As I’m getting out of the rain gear a couple of guys walk off the beach, heading towards me. They get to the 650 and stop, one guy is taking pictures of the surf, the other starts going through a backpack. After a few more pictures the camera goes in his pocket.

I finish packing my gear into the touring pack and walk over towards the guys. One is in his early 20’s, just shy of 6’ tall, with dark blonde hair and around 185 lbs. the other is much shorter, he’s maybe 5’6” tall, with black hair, both are dressed for the previously bad weather. The taller one is riding the bike, ‘shorty’ is the passenger. 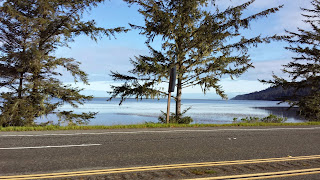 I ask where in Canada did they rode from, the rider tells me they flew into Montreal.  As he’s saying this I stop him, “What do you mean you flew into Montreal?”  Shorty says “We’re from Amsterdam, we just graduated University.”  Rider says “We found the bike online and bought it from the guy. He even picked us up at the airport.”

The rider says “We rode across Quebec, Ontario, Manitoba, Saskatchewan, Alberta, British Columbia, before dropping into Washington, and Oregon.”  Shorty says they have already ridden almost 10,000 kl since they hit the states. I say “You both rode that 650 all across Canada and the Canadian Rockies?”  I look over at them standing with giant smiles, heads shaking up and down like a couple of bobblehead dolls.

I give them giant kudos for the ride so far, they’re pretty much doing the same as me. They have a few friends and family on the ride they want to see. Other than that, they are just riding, the only real difference is they have to get back to Montreal for their return flight. We each pull out our Atlas, I start giving them some of the best places, in my opinion so far. We agree the Grand Canyon, and Horseshoe Bend. Then I suggested Zion National Park, Moab/Arches National Park, Mesa Verde Cliff Dwelling, and Million Dollar Highway. From there they wanted to head down to New Orleans, I suggest San Antonio and the River Walk on the way. Equipped with newly highlighted sights to see along the way we exchanged Instagram pages. 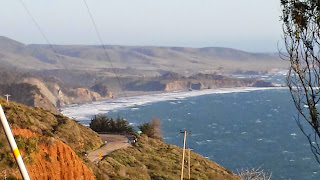 We each tell a few more lies from the road and we take a few pictures for prosperity before they start packing for the next leg of the ride. Once the backpacks are on, they climb on the bike, now I truly stand there in awe. That bike carried near 600 lbs. all the way through Canada and across the Rockies already.

Over the next month we followed each other’s progress, I saw their pictures from key spots, San Francisco, Vegas, Grand Canyon, Moab, Four Corners, Austin, New Orleans, Key West, Washington DC, and New York City. Upon reaching Montreal they sold the old 650 with only a two day $500 repair and an additions 21,000 kl. on the odometer. 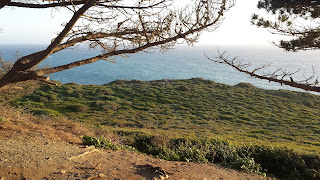 As happy as I am for the guys, I’m even sicker for most people here. We have this truly beautiful country and two kids from another country have seen more of it than probably 75% of the people that live here. Work, power, money, and things don’t make a life! Stop the rat race if for only a week, pack a bag and get into whatever moves you. Highlight a few things on an old fashioned atlas (this is not a schedule, it’s places you might see) grab a back road and open your eyes to the beauty. If you don’t make a plan, you can’t be upset if you don’t make it somewhere.
Posted by RideWithDirk at 12:07 AM

RideWithDirk
Hi I’m Dirk and I give Guided Motorcycle Tours across the country as Ride With Dirk.To hone my craft, I got on the road and spent the entire year of 2015 riding through the lower 48 states learning all that I could of the county. I’ve ridden over 42,000 miles since my start. My goal has been to learn some of the best known, even better, lesser known rides across the country. I’ve ridden through federal parks like Moab, Bryce,Redwood, and Glacier. I had the pleasure of riding well known roads like, Tail of the Dragon, Going to the Sun, and PCH 1. I have been able to ride mountain ranges like Mt Washington, Pikes Peak, Crater Lake, and Glacier. While enjoying and experiencing the rides, I’ve also been compiling a list of the best Bike Weeks and Music/Beer Festivals, around the country. Unfortunately, I haven’t been able to compile a list of the 5 star Hotels, but I have gotten very familiar with the more affordable roadside Motels. All of this started as a selfish personal ride, it has now turned into an unbelievable need to ride every day. I have been so blessed to experience this, now I’m here to share it with you and show you my passion, the wonder and beauty of our country.